A Falmouth grandmother has spoken of the moment she helped birth her own grandson this week – in her front room.

It was not the labour that new mum Paige Butt had been expecting as she went to visit her mother-in-law Jackie Underwood in Budock Road, part of the new Union Corner development, on Wednesday.

But just over three hours after the 23-year-old first starting getting back pains, baby Alfie James Matthew Underwood (nicknamed AJ) was born weighing an impressive 11lb – and, even more impressively, with no pain relief.

Grandmother Jackie, whose son Jack is Paige’s partner, said: “Even looking back it’s not really sunk in.

Paige and Jack, together with their three-year-old son JJ, had been visiting from their home at Round Ring Gardens in Penryn and the whole family were in the garden when Paige started getting pains in her back.

Her waters had broken earlier in the day but with no contractions starting she had been booked in for an induction at 6am the following morning.

However, baby Alfie had other plans and before long Paige was in full-blown labour. 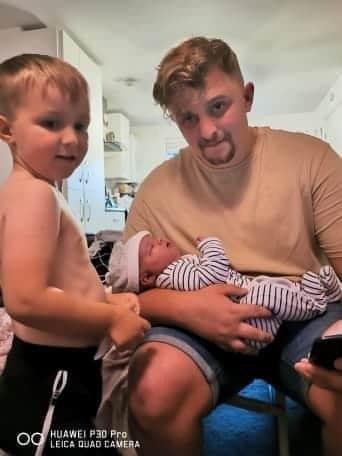 Jackie, who had gone upstairs to get ready to drive Paige to the hospital, said: “I looked downstairs and could see the pain had come on fast.

“I said, ‘We’re not making it to the hospital, we need to ring the ambulance now’.

“I ran in to the front room and got the sofa-bed out. We managed to fill it with towels, sheets and pillows and get her onto the bed.”

With the midwife 21 minutes away and the ambulance 25 minutes away, Paige was having continual contractions with no break.

Thankfully, just as Paige was getting ready to push, Helston midwife Shannon Magill walked in and took over. 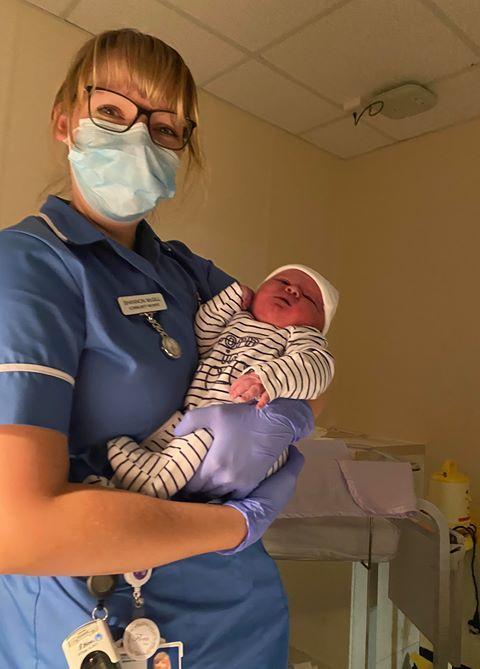 And just as well, as the birth was not without its complications. With Alfie’s head born, his body became stuck for five minutes and he was born blue.

However, after some work from ambulance staff and Shannon, who was joined by a second midwife, Alfie let out a cry and began breathing properly.

Despite this, Paige and Alfie were taken to the Royal Cornwall Hospital in Truro, where he spent a night in the neonatal unit. They are currently still there, with Alfie receiving antibiotics for a suspected infection, although he is out of neonatal and they hope to return home within a few days.

Jackie described Alfie as a “ray of sunshine” after a difficult few months for the family, which has included her mother-in-law passing away exactly a week earlier and Jack being made redundant from Carphone Warehouse the day before lockdown – and a week after the couple had booked their wedding next year.

However, Jack is due to start a new job with BT in August and with Alfie arriving – plus a new baby cousin due in September from Jackie’s daughter Abey – she said life was finally looking good again.

Jackie also paid tribute to Abey, who despite being in pain herself at 29 weeks’ pregnant and with SPD, held Paige’s hand throughout.

“Without her calmness and reassuring Paige it would have been so much harder,” she said.

Alfie is believed to be the first baby to be born on the new Union Corner development.

The family is now hoping to get hold of midwife Shannon in Helston, to say thank you properly for the care and support she gave.

Trains travelling in and out of Cornwall have been cancelled today after hairline cracks were found on several high-speed trains. Falmouth Packet | News …

Most people expect to be able to do their job without getting assaulted – but that isn’t always the case if you’re an emergency service worker. Falmouth Packet | News …

A fishermen from the Carrick Roads has seen his “pride and joy” working boat damaged after it was apparently tipped over on purpose and left vulnerable to the sea. Falmouth Packet | News …