A shop owner from Helston has spoken of the moment she lost £350 after she became the victim of a distraction theft.

Julia Wren, from JJ News in Coinagehall Street, has now warned other businesses in the area to be alert, as she had since been told the couple were still believed to be in the area and had “resurfaced” yesterday in another shop, having visited a number of businesses in town.

“If they did it to every shop they went in they would be loaded,” she said.

“At a time when for many other shops that have only just opened and are already struggling to cope on a financial basis, I think it’s particularly callous.”

Unusually she was alone in the shop on Thursday, when it happened, as her partner had gone to the wholesalers and the other member of staff was not in that day. Even her two dogs, which normally sleep in the shop, had been shut into the house part due to it being so windy and the door blowing open.

She said a man and a woman came into the shop at around 10.45am, “doing touristy things.”

Read next: Man and woman steal cash in distraction theft from Helston shop

They browsed the shop’s card room and pipe room, before buying some cigarettes and a coffee.

The couple then asked to look at some jewellery in the pipe room, which is in a separate area from the main shop.

After showing them a few pieces the woman asked to look at a few more, but the man disappeared before returning a short while later having apparently been on the phone.

They then said they would go away to think about which piece to buy and left.

Julia continued to put away the rest of the jewellery – something she said took “a matter of seconds” – before returning to the main shop, by which time the couple had gone.

The whole process had taken only around 15 minutes and it was not until the evening, when her partner started to cash up, that they realised anything was amiss.

“He starts looking at me saying, ‘Where’s the till?’ I said, ‘Where it normally is.’

“He said, ‘It’s not there’ and sure enough it wasn’t. Then we started thinking somebody had pinched it,” she said.

Watching back the shop’s CCTV footage from its four cameras, she discovered that after the man disappeared out of the pipe room he had gone behind the counter and taken a cash tin and some notes.

“You see him on the camera walking back with the tin. He went into the card room and put it underneath a stand. When they go to leave she goes and puts it in her bag.

“The annoying this is, when he came back to the pipe room you could see him put his thumb up to her, to say ‘Job done’,” said Julia.

“I’m angry and it’s taken me a couple of days to get over my anger. All the nice comments from customers has helped to heal it a little bit.”

She added that had it not been for the fact her partner had gone to Booker’s only that morning for more stock, taking with him most of the money that would otherwise have been in the cash tin, they would have lost quite a lot more. 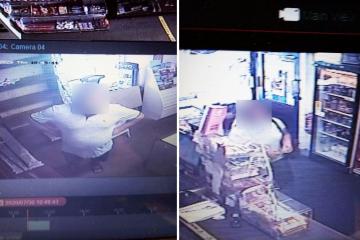