A couple who almost lost their business and were left living off credit cards after being scammed out of more than £14,000 are warning others not to fall victim.

Sam and Dave Pentin, of the Terrace Gallery in Penryn, have shared their story to make others aware of how easily it can be to lose everything in the click of a button.

Thankfully their story has a happy ending, but not before plenty of tears and months of anxiety.

It began on December 1 last year, when they were about to complete on the purchase of the gallery and were transferring over a deposit of £14,200 to what they believed was their solicitor.

Sam had received an email with account details asking for the transfer and no thought crossed her mind that they could be anything but legitimate.

“We had no reason to believe it wasn’t our solicitor. She had been on holiday, we chatted about it.

“The sort code was good and the name of the account was the same name as the solicitors’ account they used. I made the transfer,” she said.

It was not until she received another email from their solicitor to say that this wasn’t their account that reality hit – their money had been transferred to fraudsters.

“It really makes you want to vomit,” she said.

Dave contacted their bank, Lloyds, straight away, and they were confident it would be sorted.

Little did the couple realise it would take almost six months for them to get their money back.

“They said it will be three days, then another 20 days. It was awful,” said Sam, who believes it was only resolved after they contacted a reporter for the Daily Mail for advice, who had written about a similar situation, and she took their story on.

In the meantime the couple almost lost the purchase of the gallery and were only able to secure it with money they had set aside for renovations.

“We lived off our credit cards for five months. All my husband earned was going into the renovations.

“We stacked up a load of interest from the credit cards, because Lloyds wouldn’t do anything,” claimed Sam.

Read next: Netflix issues scam alert after users targeted – what to look out for

By April Sam had “just had enough” and contacted a reporter for Mail Money. Finally, in mid May, the couple had just under half of the stolen money reimbursed by the fraudsters’ bank and the other half from Lloyds the same month.

Sam warned people to “double check everything” when completing transactions and confirming details in person rather than over email.

She also advised anybody finding themselves caught out to keep pushing their bank for compensation, as there is a fund set up for this purpose.

Happily the gallery is now bought and open, currently between Thursday and Sunday, 12 noon to 6pm, plus every day during the Open Studios event in September.

A spokesperson for Lloyds Bank said: “We have a great deal of sympathy for Mr and Mrs Pentin who were victims of an email scam. Unfortunately they received different account details in an email from a different address and did not check these details with the solicitor before transferring £14,000 via their secure online banking.

“We acted immediately as soon as Mr Pentin reported the fraud and as a result we were able to secure almost 60 per cent of the money lost. We have contacted the receiving bank several times to get the money back into our customer’s account.

“Emails are much easier to compromise than other methods of communication and all customers should double-check any payment details received by phoning the company on a known number before parting with any money.” 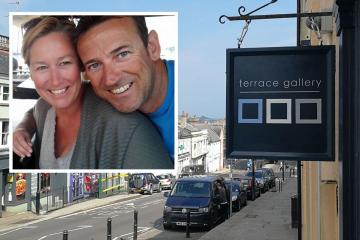