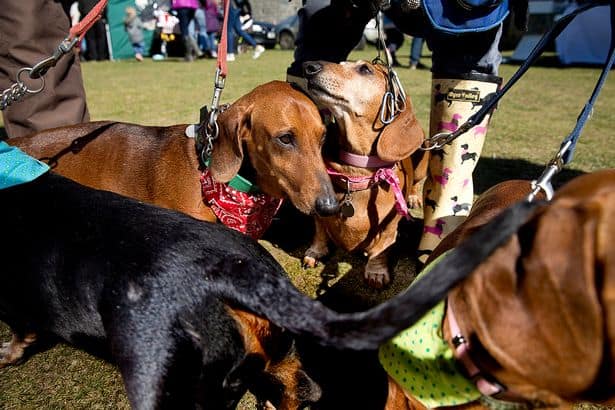 We’ve lost the title after only two weeks!

Mass sausage dog walk has been topped after only two weeks of holding the world record.

Hundreds of dachshunds and their owners gathered at Perranporth Beach at the end of March in a bid to set a new record of pooches in one place. 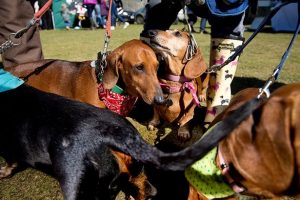 The aim was to beat the 500 which gathered in Wales for an attempt to set a Guinness world record.

But now, after holding the title since March 25 with 601 dachshunds meeting on the beach, Cornwall has been defeated.

More than 1,000 dachshunds descended on Heaton Park in Manchester at the weekend for an even bigger mass walkies.

The fun-filled Mass Dachshund Walk was the brainchild of Julie Barbour, a member of the North West Dachshund Owners group.

Julie said 1,239 dachshunds were present, marking the gathering as the largest to date.

All profits raised from a raffle went to the charity Dedicated to Dachshunds with IVDD, which provides support for the dogs who need treatment for abnormal intervertebral discs.

An estimated 25% of all dachshunds will develop abnormal intervertebral discs to the point where they need veterinary treatment.

The Red Foundation, which was launched last year to offer emergency rescue and fostering services for sausage dogs, also benefitted.

But defensive dog owners were quick to point out that Cornwall still had the title for the largest number of sausage dogs on a beach.

We know where we would rather be…

Following Cornwall’s event, the organiser claimed she could be stopped from holding another meet following complaints over litter and a smell of urine.

She claimed that despite business owners being grateful for a boost in footfall, the possibility of holding an event next year is uncertain after Perranzabuloe Parish Council received a number of complaints.

Dogs make friends at Sausage Fest held at Perranporth beach to attempt to break the world record for the most Daschunds in the same place at the same time. (Image: Greg Martin)
Pixie said: “They said they were not going to allow us to do the event again. I had a phone call at 9.30pm from someone who was complaining because we had parked on the green.

“I had asked a number of times prior to the event if the vehicle access would be opened and they didn’t tell me that we couldn’t park on the green.

“They were also complaining because we had left some bunting and straws on the beach. She also said the whole place smelt of dog wee.

“She said ‘there is no way it’s going to be held there again’.”

WIN A THREE DAY BREAK AT THE PARK, MAWGAN PORTH

Spring Heatwave is coming to Cornwall