As children up and down the country tore open presents on Christmas Day, one little boy in Cornwall was able to celebrate the day knowing that he had made the day a little bit happier for those poorly in hospital – despite battling cancer himself.

Eight-year-old Elliott Furse first started the ‘Elliott Christmas Appeal’ to donate bags of toys to young patients two years ago, before his own visits to hospital even began.

He came up with the idea himself while he was making his list for Santa and said he wanted to help others instead of receiving the latest toys.

His efforts have generated a “huge volume of toys” for kids at the Royal Cornwall Hospital over the festive period.

And despite now battling a “substantial” brain tumour, his proud parents said he has been determined to continue with the campaign for a third year.

Elliott has undergone two major operations since he collapsed in his bedroom in July and was rushed to Bristol Children’s Hospital.

He has also been through six weeks of intensive chemotherapy and radiotherapy and lost control of his arms, legs and speech.

After undergoing rehabilitation to help get his speech back and dexterity in his arms, he is now recovering at home in Gulval, west Cornwall.

But his dad Christian Furse, 37, said his son’s thoughts instantly turned to helping others.

He said: “Once Elliott was able to talk again, he immediately mentioned his Christmas appeal.

“We told him to give it a rest for this year but he was insistent.” 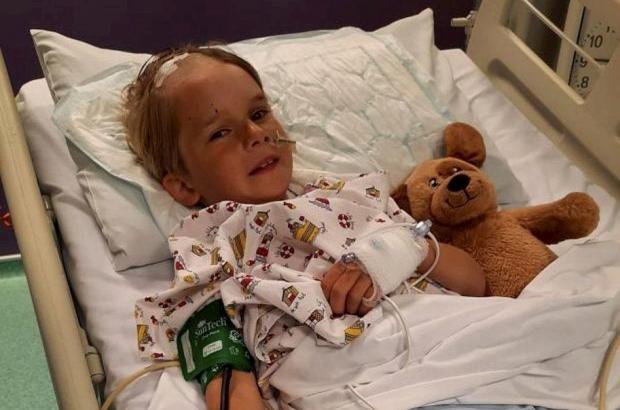 The family subsequently set up a Just Giving page which has raised more than £5,000 for toys to donate.

Any money that came in after this year’s presents were bought will roll over to next year’s donations.

“The fact he wants to help others despite having the worst time ever.

“He knows how hard hospitals are – especially for kids over a Covid Christmas.

“The maturity and wisdom he has shown has surpassed any of our expectations.”

Speaking about Elliott’s diagnosis, Mr Furse said: “There are no other words to describe it, other than utterly devastating.

“Elliott has done a fundraiser for his local hospital for the last couple of years and has always been very kind, caring and thoughtful to others.

“No child deserves what Elliott has and he has always thought of others before him which makes it especially hard.”

Christian said they became worried when they noticed Elliott had started being more clumsy and would trip and stumble a lot more than children normally would.

They took him to the doctors who gave him a clean bill of health but his symptoms worsened.

He then collapsed and his body could not hold his weight or his neck up.

Christian added: “We phoned 999 and an ambulance came and he was diagnosed with a suspected stroke.

“He was taken into Treliske Hospital for a CT scan and they found a brain tumour. From there things progressed very quickly and he was blue-lighted to Bristol Children’s Hospital.

“It was a huge bombshell and was hard to take in the gravity of it and almost go on to auto-pilot. But it is utterly devastating. A tumour of any sort is horrific especially in the brain. No eight-year-old deserves to be going through this.”

Elliott underwent an initial operation to drain the fluid from his brain.

Christian and wife Sam, 33, who run a wedding photography business.

Elliott, who is one of five children, started his appeal in 2018 when he was just six years old.

“They were all writing up their lists for Santa and Elliott’s had absolutely nothing on it,” Mr Furse said.

“Elliott told us ‘I’ve got everything I need, I’d rather money went to children who don’t have anything’.

“It was an unbelievably sweet gesture.”

To donate to the appeal visit www.justgiving.com/crowdfunding/elliott-toy-appeal