Cut Capers – supported by Horses On The Beach 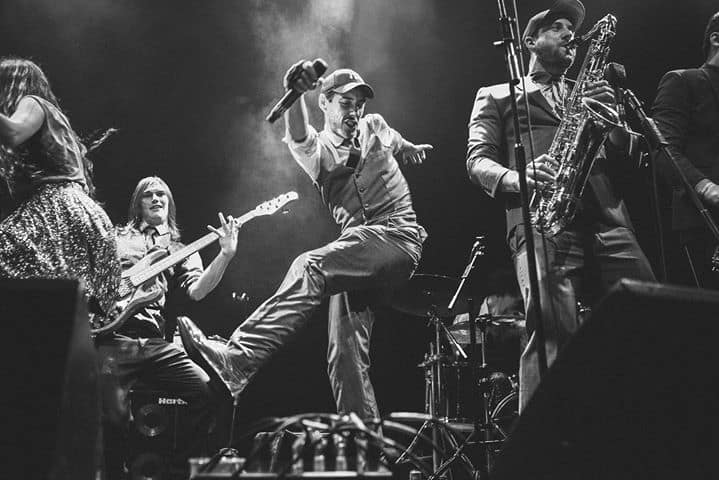 CUT CAPERS are a 9-piece Bristol band whose energetic live performance and infectious sound have won them a cult following on the British festival scene. Mixing a swinging vintage-style brass section with funk, soul and hip-hop, they have over the years, established themselves as a formidable live outfit, playing regular headline shows and main stage performances at some of the UK’s biggest festivals including Glastonbury and Boomtown Fair.

In 2015 they began spreading their unique blend of tight grooves with a four-piece horn section and soulful female vocals to Europe and further afield. They have now performed in over 50 cities across 8 countries including Italy, Turkey and Bahrain.

The band have released several singles on lead up to their 2016 debut album Say What. Latest release Get Movin’ is the first single off brilliant second album Metropolis, which was released to huge acclaim in May 2019.

Horses On The Beach.
When asked to explain what Alt-Funk is, the Cornwall based band carefully described the steps necessary to play it. They took Soul and boiled it up with a pinch of Jazz and Funk, then expertly distilled it into a potent concoction that, if ingested, causes the consumer to throw their cares into the wind and dance like they really, really mean it.

With influences like Vulfpeck, The Cat Empire and Deluxe, it’s not surprising that their live shows are brimming with energy. Off the cuff sax solos ride the waves of their refreshing compositions that whisk you from blazing chorus to the most delicate of interludes. In 2019 they wafted their funky beats all around the country, jumping back on the festival circuit at the likes of Wonderfields, Port Elliot and Boomtown.
“Is there a better young band on the circuit? Nay!” – Andy Quick, Land Of The Giants

Find out more at: https://www.facebook.com/HOTBOfficial/

No event parking on site or on Malpas Road. Please use Garras Wharf Car Park next to Tesco (TR1 2TN) which is free every day after 4PM.