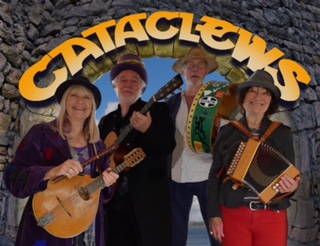 The beginnings of Cataclews go back to November 2010 when Brian and Christine moved to Trevone and started to get involved in the local folk scene playing in the village pub’s open mic nights.

Eventually forming a band, they needed a name. Looking at the local ordinance survey map, Brain suggested Cataclews after the rocky peninsula that juts out from the end of Harlyn Bay. Everyone agreed and the band was established.

They quickly started to receive invites to play at garden festivals, weddings, birthday celebrations, anniversaries and our own Blue Moon Festival.

The band have been through several permutations with wonderful folk musicians. Now however, Brian and Christine are joined by two other Sunset Session regulars, Tim Brine and Sue Franklin to form the perfect folk super-group.

This endearing band will raise your spirits, set your toes a tappin’ and most likely get you on your feet for a spin or two.