Celebrities gathered at a Cornish harbour this morning to begin filming for a new TV series.

Stars such as DJ and actor Craig Charles from Red Dwarf fame, Pussycat Doll Kimberley Wyatt and singer Fleur East were among those spotted.

The celebrities gather on the harbour. Photo: Kathy White

The celebrities head out on a boat. Photo: Kathy White

It is thought t be in connection with a new TV series being made by ITV, called Don’t Rock the Boat and hosted by former cricketer and now Top Gear presenter Freddie Flintoff, along with The Voice’s AJ Odudu.

The series will see 12 celebrities compete as they row the entire length of Britain, travelling more than 500 miles on the open water.

The celebrities gathered on the harbour before taking to the water in boats.

There was a warning to avoid the area, with boats and kayaks banned from launching while filming took place. 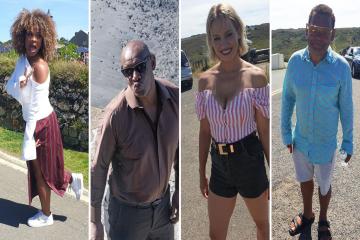