There’s a new foodie capital of Cornwall and here’s why it’s definitely worth a visit. 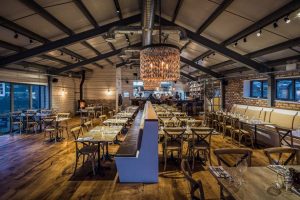 Speaking to a few renowned chefs in Cornwall lately, one place keeps being mentioned as the next foodie haven in the county.

For years it was Padstow thanks to the Rick Stein (and then Paul Ainsworth) factor, then Port Isaac due to the arrival of Nathan Outlaw and latterly it has been Porthleven for its food festival and myriad eateries, notable among them being Jude Kereama’s Kota and Kota Kai.

However, there’s a new kid on the block. Well, when I say new I mean over 200 years old, but Charlestown is feeling fresh and cool in 2018.

There are old reliables like the Rashleigh Arms and the Pierhouse, which has just had a revamp, as well as new-ish venues such as Lovedays, owned by Eden Project founder Tim Smit, and The Galley, a quirky shed with excellent pasties and sandwiches.

If you fancy inhaling some Poldark breath or standing where Tom Hardy once rippled, then you can also dine at the Harbourside Inn, Charlie’s Coffee House and Boathouse, Wreckers, Tall Ships Creamery and Short & Strong Café and Deli among others. Not bad for a village the size of Charlestown.

However, there is one restaurant that is proving a real winner … The Longstore. Half industrial chic, half maritime heritage, it’s an impressive looking building, overlooking that harbour.

However, the food at the former ships’ sail-maker (hence, the lengthy interior) is even more classy thanks to the skill of executive chef Ben Ambridge and the restaurant’s triumvirate of directors Melissa and John Marquis and Tom Gaze, who under the Pollocks Pub Co name already have previous at The Sharksfin in Mevagissey – a great place for family dining – and the Golden Lion in Port Isaac.

Ben flexed his superior chef muscles at a very special night last week, demonstrating why The Longstore is putting Charlestown on the dining map.

Joe trained under Sam Moody at Michelin-starred restaurant The Priory in Cornwall, and has since gone on to earn two AA rosettes at The Beach at Bude and be named as a “chef to watch in 2018” by Olive Magazine.

The complementary food the pair and their team prepared last week was truly epic – a mixture of the delicate and the hearty, exploratory and inventive without a whiff of pretension.

The evening started with confit duck ravioli, wild garlic and potato puree with girolles – earthy and delightful – and smoked ham hock with clams, cockles and peas – the shellfish giving a nifty lift to the melt-in-mouth ham.

There was a wine flight to match each course. I was driving and The Nurse had to get up at 5.30 the next morning to, well, nurse. Goddammit.

One could forget the booze with dishes such as cod loin, charred gypsy pepper stuffed with courgette, smoked mussels, a peppery romesco sauce, almonds with a tarragon butter crust. The finest of dining without the curse of “fine dining”, which now seems to be a dying concept.

The next dish was something special and unusual from Ben – beef fillet wrapped in prosciutto with rainbow chard and crispy sage in a bone marrow jus. Deep and sensuous, it was like the greatest pizza topping in the world without the base. I apologise if that’s doing the chef’s creation a disservice.

There then followed not one but two desserts. That’s what you call a good meal. Lemon cream cheese, brandy snap, raspberry sorbet, macerated raspberries and basil from Joe and chocolate and clotted cream panna cotta with honeycomb and salted caramel sauce from Ben. Both exquisite with the latter the nearest thing I’ve tasted to my mother-in-law’s fabled chocolate mousse, which is the highest accolade a chef could receive.

In fact, some entrepreneur should set up The Nurse’s mum with her own restaurant. She’s that good. Vi Pennington – you can find her in Tresillian. Michelin star material or, the very least, Cornwall’s answer to Mary Berry with added attitude.

The Longstore collaboration meal rivalled anything you’d taste in one of Cornwall’s lauded Michelin establishments and at £45 a head was incredibly reasonable.

Fear not if you want a more down-to-earth meal as The Longstore’s regular evening menu features an excellent array of steaks and seafood dishes, as well as a great lunchtime selection.

The Longstore is laid-back and all-inclusive but with a touch of class, and is just one reason why you should visit Charlestown immediately.