FALMOUTH residents have said that works being carried out by the industrial marine contractor Keynvor Morlift Ltd (KML) at Falmouth Wharves are ‘affecting their mental health’.

Coverage of the issue by The Packet has been ongoing over the last two years, most recently in September 2019, when residents of North Parade claimed that the noise, traffic and pollution created by the works exporting Falmouth granite by sea was rendering them ‘prisoners in their own homes’.

The residents of the street, adjacent to the Wharves, say there has been no progress towards reducing the problems.

Karen Jasper, whose garden overlooks the works, said: “I personally am at my wits end, my mental and emotional health and my work are being affected.

“It’s very invasive. It’s just beyond a joke. Falmouth’s got the docks so I can’t help but think ‘why here’. It’s a residential area and the noise that’s coming from there is just appalling.”

A resident of North Parade who asked not to be named said: “There’s a very, very bad feeling still on North Parade.

“I think it’s changed a lot of people’s heads, there’s a lot of depression on the street with people that live over the site because it’s so loud. It really is affecting people’s mental health.

“It’s very aggressive, it’s basically having a quarry in the middle of the area and they’re not adhering to business hours.

“Sometimes it’s like listening to a firing squad going off because it just bounces all around the estuary and up into Falmouth.

Resident Rob Bryant added: “Up until now absolutely nothing has been done to address these important issues on noise, dust pollution, excessive disruption of traffic, parking and the personal wellbeing of many local residents, many of whom are retirees.”

North Parade resident Gloria Butterworth, who lives directly above the site, added: “We’re back to square one really.

“I know people get very depressed about it because they can’t open their windows or doors and a lot of people are just stuck in the house like that.

“All our buildings are shaking up here. When they drop the rocks we feel the vibrations of it really badly.

“We didn’t have it during lockdown and I kept saying how different it was, it was such a pleasure living here. I came to retire here for peace and quiet and we haven’t got much of that.”

READ MORE: We are prisoners in our own homes, say Falmouth residents

A spokesperson for KML said: “Ship, workboat and barge movements have been taking place on this basis at Falmouth Wharves for more than 90 years.

“In relation to the routine vessel movements, these are planned and managed around the weather, the tides and the vessel schedules, so not always within office hours.

“We do everything we can to arrange deliveries inside working hours but occasionally there are elements outside of our control that mean this is not possible.

“We operate considerately and liaise directly with our neighbours and residents to keep them updated on our operations. We have also put in place measures to ensure that dust, diesel fumes and noise is kept to a minimum.

“We value our place in the community and good relations with our neighbours are very important to us. We provide dozens of jobs and spend a large amount of money in the local economy and supply chain, proudly exporting Cornish granite to a national and international market for vital sea defence works, protecting homes, infrastructure and livelihoods all over the UK and Europe.

“We hope and expect that residents of Falmouth understand that Falmouth is a working commercial port and always has been.”

A spokesperson from Cornwall Council said: “We are aware of the issue and are investigating complaints. We are also communicating with the operators to find a resolution.”

KML’s current operation ended on Sunday (September 13) and the dates for the next operation are not yet confirmed. 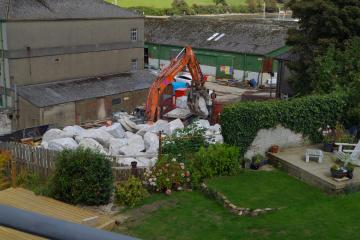