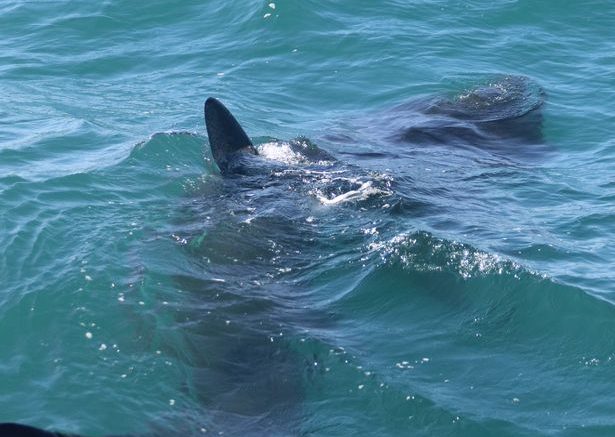 Basking sharks spotted off Cornwall for first time in season

They were spotted near Penzance in Mount’s Bay and are late in the season, with climate change possibly to blame for their arrival not being as early as usual

Basking sharks have been spotted off Cornwall for the first time this year but the seemingly late arrival in our waters may have something to do with climate change. 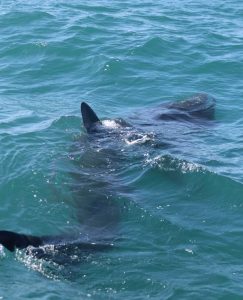 Basking sharks spotted off Cornwall for first time in season

The majestic and inoffensive gentle giants were spotted off Penzance by passengers and staff on a wildlife cruise.

On Friday (April 20), it was basking sharks that its customers had the chance to spot as the company’s catamaran sailed east of Mount’s Bay.

Duncan Jones, from Marine Discovery Penzance, posted on Facebook: “We had a big surprise – two actually. We sailed east looking for bottlenose dolphins, as we know they have been around lately but we keep missing them.

“Sailing across the bay in a very brisk northeasterly, we spotted two large basking sharks.”

However the business said that what would been ‘normal’ 10 years ago was becoming an increasingly rare treat. He said that while mid April was not an unusual time to spot basking sharks, their numbers were lower than in previous years.

Mr Jones added: “In recent years basking shark sightings in Cornwall have been extremely scarce, and then two came along at once.

“They were very large – probably seven metres or so judging by how they compared to the size of the boat. We had better views of them than we have had of basking sharks for years – a real thrill. The water is still only nine degrees so they’re definitely not here for the balmy temperatures.

“Later on we saw masses of feeding shearwaters, a porpoise right under the coast near Porthcurno, and Silverback the grey seal lounging on the rocks. Didn’t find the dolphins but we have a whole season ahead of us yet.”

Mr Jones believed changes in plankton in the seas off the South West over the past few years may be responsible for the drop in basking shark sightings. He said there has been an increase in gelatinous plankton and a decrease in crustaceous plankton, which is the one basking sharks feed on.

He added: “Climate change will certainly be a driver for this and will likely be an amplifier of other large scale mechanisms, which influence plankton structure and plankton species distribution.

“In this part of the north east Atlantic it is believed Calunus helgolandicus is important food for sharks and its abundance has certainly been down for the last few years.”

Hannah Jones, from Marine Discovery Penzance, said she has noticed a drop in numbers since 2011. She said: “It could be shortage of favoured prey due to climate change, could be part of a natural cycle, probably a combination of a few factors.

“Due to the very cold end of winter and spring, water temp is actually lower now than it is normally at this time of year.

“However these two were very large sharks and we had better views of them than we have had of sharks for years so it was very exciting to see them. It may be the start of a good basking shark year, or they may be the only ones we see all summer – only time will tell.”