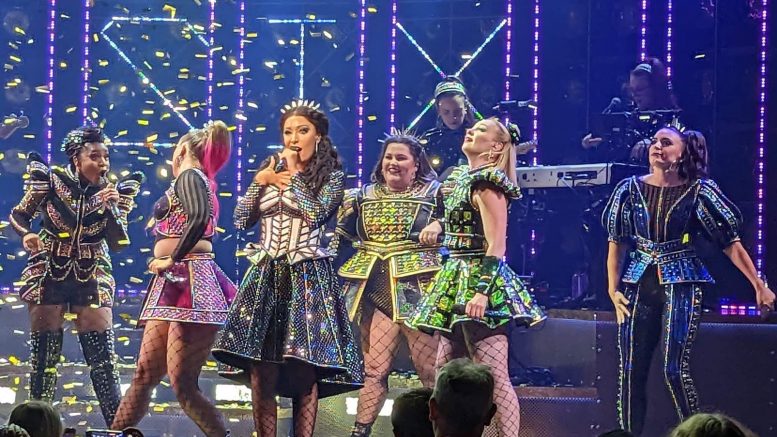 Move over Spice Girls, there’s a new girl group in town – and they come with history.

The musical SIX opened in Truro last night at the Hall for Cornwall, bringing with it a very different take on the wives of Henry VIII.

This is girl-power for the 21st century.

When I mentioned this to my husband back at home his response was: “Huh, that’s not a word you’d usually associate with Henry VIII’s wives.”

And it’s true, most of them didn’t exactly meet the nicest end, and we’d probably not even know their names if it wasn’t for…a man.

After all, as the singing sirens so accurately pointed out – who knows the name of Henry VII’s wife off the top of their head? (Mind you, he did do a lot less ‘topping off’ to heads than his son… But more on that later.)

However, let’s pause a moment. Were it NOT for his six wives and their various escapades, old Henry boy would just be just another fat, randy man with a crown on his head – and don’t tell me there haven’t been plenty of those through the course of history. But there aren’t 12-year-olds across the country learning those names.

His wives MADE Henry.

Or at least that’s what the six women on stage will tell you – and who am I to argue with a half-dozen femme fatales in glitter boots and costumes straight from the wardrobe of Blake’s 7? (But with more sparkles. So many more sparkles.)

It begins in X-Factor style, with whooping and hollering from the front (although I wasn’t clear if these were ‘planted’ people making a noise, or a group of girls just having a really good time – but it worked).

A colourful ending to the show, in which the audience could get their phones out Picture: Kate Lockett

Each ‘wife’ is competing to show why they had it the worst, whether it was being divorced for failing to provide a male heir, beheaded for playing the king at his own game when it came to lovers, or execution for a sexual past – in what the show suggests was a clear case of grooming and abuse from the age of the 13 by at least three men, before her beheading at just 19.

It’s worth noting at this point that the above Katherine Howard was played by Leesa Tulley last night, in a change from the main cast, and if that’s her making her professional debut as stated, I look forward to what’s to come. All the cast were stand out, in fact (Chloe Hart as Catherine Aragon bringing the house down for quite some minutes after her solo number – the girl has pipes).

Back to the show, it’s up to Catherine Parr (the one that survived, for those not paying attention at the back) to question why they were competing, before pointing out she too was forced to leave the love of her life at the King’s bequest, but then listing all her individual achievements after his death – including as an acclaimed author of religious books.

The group then go on to ‘re-write’ their own version of history, and how their stories should have concluded.

It’s a raunchy, cheeky, 80-minute romp through history (no interval, get your ice cream at the start), via the medium of girl bands, neon German techno and an on-your-feet ending where the audience are actively encouraged to get their phones out.

This show is not just one for the girls though – indeed, a middle-aged chap sitting next to me last night had attended alongside his wife and was clearly loving every moment.

For the beauty of the show is that while this is very much about a group of strong women, realising they are their own individuals, there is no ‘man-hating’ at all.

Except Henry of course – but then he probably deserves it.

It truly is a musical for the modern age and – dare I say it – rivals theatrical heavyweights such as Andrew Lloyd Webber.

Its rise to fame even has distinct echoes of the musical theatre supremo’s own back story [an early version of Joseph and the Amazing Technicolor Dreamcoat was famously written as a school production, before it went on to become one of the most recognised stage shows ever].

In the case of SIX, it was first performed by a group of Cambridge University students at the Edinburgh Fringe Festival in 2017.

Fast forward five years and it’s had runs both in the West End and on Broadway, and is now touring theatres around the country.

I can’t wait to see what creators Toby Marlow and Lucy Moss do next.

And while tickets are limited for the remainder of the run in Truro, I would urge you to snaffle one up if you get the chance before Sunday. I’m quite seriously debating treating myself to a second watch. When did you last say that about a show you’d seen less than 12 hours earlier?